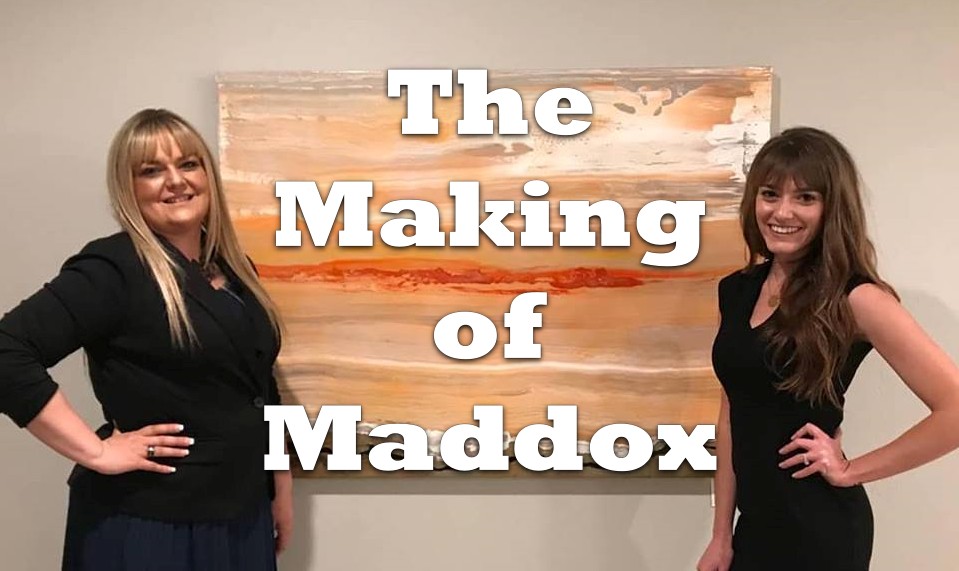 The making of Maddox

Near the end of September, I received a message from a friend who is married to one of the teachers I work with at school. A former teacher, now working as a real estate professional had a proposition for me. I prayed as I returned her phone call that it would not be a request for a wine and paint night. Shelbi carefully outline an idea pregnant with possibility…she was helping to renovate and flip a local house and had conjured the notion of an artist creating custom work for the house. The way she described it felt effervescent and at the time, I was still feeling quite lost in not knowing what new adventure I was going to step into…and I grew more excited the more I thought about partnering with real estate professionals to help stage homes and gain some show space and exposure.

Shelbi is brilliant in her talent of designing spaces and color palettes. She walked me through the house a few times during the demo and repair stages, handed me color swatches, and we eyeballed walls imagining what art would look like hanging there. And then, I went to work. I used Shelbi’s color swatches as a jumping off place and started test canvases and expanding the color palettes. I watched fashion shows from some of my favorite clothing designers for ideas on cohesion and relationships. Then came the rocks and minerals. For some reason, many of the fluid acrylic pour style paintings I have done simply look like agate or minerals, so why not go directly to the source? I spent countless late night hours pouring over pictures of different agates and geodes searching for inspiration. You should see the vision boards! I should probably apologize to all my Pinterest followers for the past few months…I probably flooded their feeds with a ton of what one might consider weird stuff.

All truth told, I was ready to begin the large scale painting back in December and had planned to spend a week of my winter vacation time doing just that. Unfortunately, mother nature had a way of sidetracking me. I ended up avoiding major snow storms in my Aztec headquarters by simply extending my time at home base, with Momma in my home town. While I was grateful for all of the down time….months and months it seems from the dates on my posts…I knew the time was coming to throw some dropcloth down and get messy. That time started after school in the living room of my apartment for several weeks in February, starting base layers on several of the large box pieces.

By Spring Break week in March, I needed to meet the Maddox deadline and I canceled everything in order to make some magic happen. Six months of prep and research converged on six days. I keep pretty strange artist hours most of the time anyway…maximizing those most creative times…but this was almost insane. I worked 10, 12, and 15 hour days in the same pair of pants and shoes, usually keeping late and early hours in the studio, resting my back, food breaks, and sleeping when necessary. My manicure was trashed, my house was a mess, the studio was worse, and that is just not normal for me. When people have asked me about those days, many are quick to think that because I was making art it wasn’t tough. While I had a blast, and I wouldn’t have had it any other way because I was happier than a pig in fresh mud, putting together this collection was intense work. I have a true appreciation for prep and research time now.

The day of my deadline arrived and I had completed the collection at 2am with load in scheduled for 4pm. For a few moments, I stood looking at all the completed works and I became so overwhelmed with how everything turned out. I am truly proud of what I was able to accomplish. I won’t lie, I cried. Twice. I became last minute panicked on the way to drop off and load in, praying that my collaborators, specifically Shelbi, would be pleased at what I done. It was with great relief to hear their exuberant positive feedback as I stood there with baited breath. Then we started mapping out where the paintings would hang in the house. It was incredible how each piece found their place and I was amazed at how well the work seemed to be “at home” in the space.

For now, the paintings hang in the house on Maddox Avenue…I enjoyed our open house and art show reception very much. If you would like to experience a little bit of that, there is a short video and some photos over on our Facebook page you should check out. Now that all of the pieces are available, I am interested to see where they journey from here. And, as always I am on the lookout for my new adventure….

Thank you to everyone who made The Maddox Collection possible.